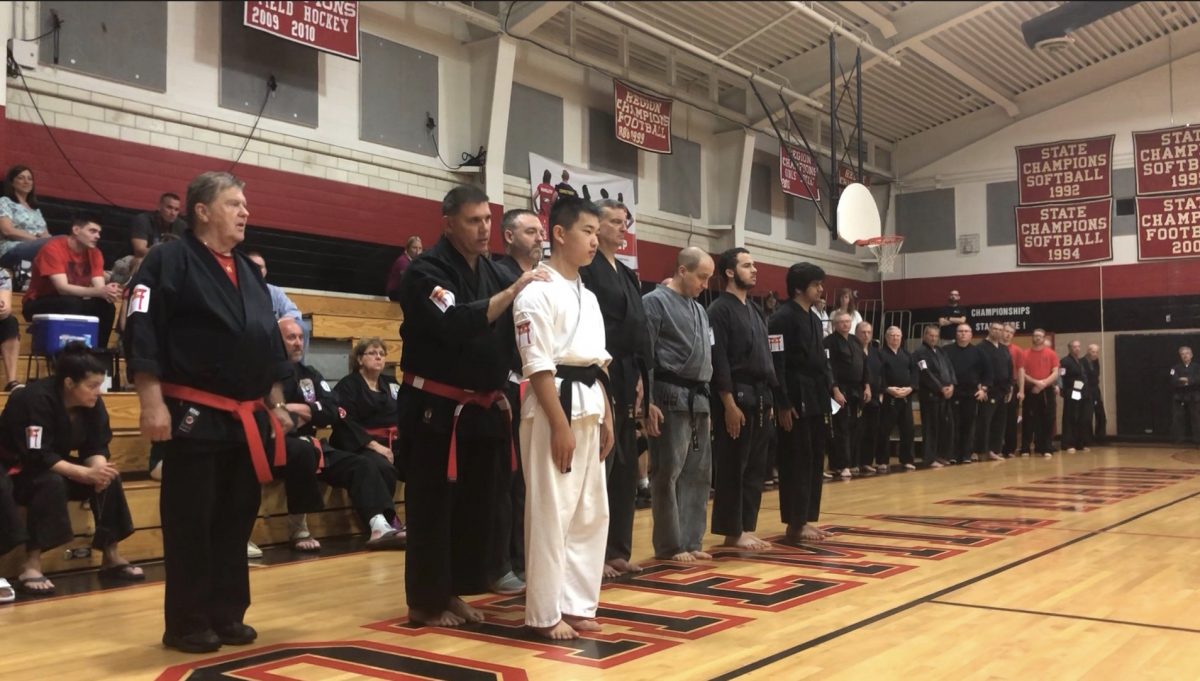 The 2019 Order of Isshin-Ryu Summer Shiai held on June 15, 2019 was a great event with many Masters of Isshin-Ryu karate from other organizations in attendance.  In addition to our tournament, there were seminars by several prominent Masters of Isshin-Ryu karate, including Grandmaster Denny Shaffer, Master Marvin Carmona, Master Carl Martin, Master Frank Black, Master Robert Kristensen, Master Ortenzio-Cooling, and Master Latimer. A great deal of knowledge and comradery was shared at the event!

There were a number of Black Belt promotions at the Shiai.

Joshua Poventud and Arthur Sampson were promoted to the rank of Sho Dan (1st Degree Black Belt). Both are students of Master Latimer and their evaluations were admirable and impressive.

As Master Latimer said, “I am very proud of both students and hope they continue now that the door is unlocked. They must hopefully enter for higher learning.”

Kyle Baker and Nick Hocker were promoted to the rank of Sho Dan. Both are students of Master Cimorosi

Mr. Hocker, a 14-year old student, worked very hard to be prepared and exceeded the expectations of a Junior Black Belt. He was elevated to Sho Dan, making him the youngest person in Order of Isshin-Ryu Karate history to ever receive a Black Belt. The usual minimum age for Sho Dan rank is 16 years old.

As Master Cimorosi said, “These gentleman worked extra hard to be prepared for their evaluations by coming to class early, staying after class, meeting with me on off-nights, traveling to other Dojo’s, getting together on Sunday’s after church, and videotaping their kata to review with me. Their hard work and extra dedication paid-off and none of them were satisfied with a passing grade of an A – they were shooting for the A-plus. I’m very blessed, proud and honored to be their Sensei.”

A special congratulations to Mark Fellenbaum, also a student of Master Cimorosi, for his promotion to Sho Dan Ho (prepared to be evaluated for Sho Dan). “Mr. Fellenbaum, it’s now up to you. I got your back, but you have to earn it!” – Master Cimorosi

Congratulations to all of the Order of Isshin-Ryu Karate-ka on their promotions at the Summer Shiai. Nothing is given in the Dojo, it is earned!