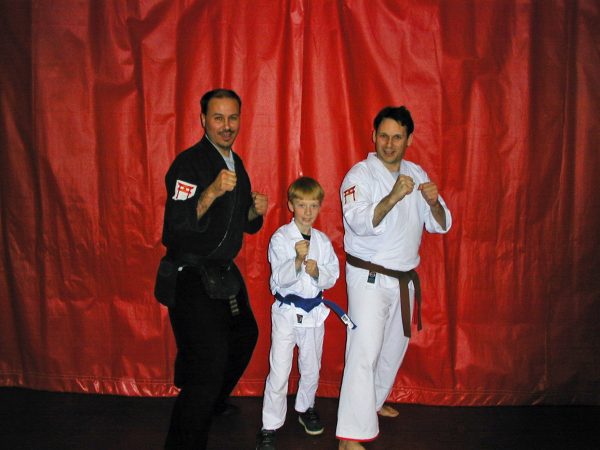 A dedicated member of the Allentown, Pennsylvania dojo, Frank Schwartz was an absolute inspiration in many ways.  Not gifted with extreme talents for martial arts, he did not view this as a hurdle in his development and, in fact, worked twice as hard as the next person throughout his training.  Frank projected the qualities of a genuine family man and always had time to ask how you were doing.

Upon receiving his sho-dan (black belt) ranking, Frank fell victim to cancer.  He fought like a true warrior.  On April 6, 2010 Frank sent an email to all members of the OI explaining his illness.  This email provides a glimpse of what true and absolute courage is all about.  Here are Frank’s words from that email:

Hello everyone.  This is the most difficult message I have ever had to post before, so here goes.

I don’t know how to dance around this, so I will just say it outright.  I am going to die, most likely within the next month.  I have been losing weight, I am now down to 128lbs (down from 212), and I am being admitted into Johns Hopkins hospital right now.  My blast count has returned, and there are no other drugs or trials that will work any better.

Basically, the short version of this is that the GVH has been preventing me from absorbing any of the meds I have been taking, and that includes the AC220 drug which did a wonderful job at holding my leukemia back.  However, the theory is that the AC220 did so well that the neutrofils it produced have somehow re-kindled my gut GVH, and so the vicious cycle.  I was told there are no more options for me.

I am not upset so much about dying as I am about leaving my wife and kids behind to fend for themselves.  I don’t have many regrets, as I think have reconciled most my sins and past issues.  I know God has forgiven me.

How ironic that I would get this news one day short of the year anniversary of me being diagnosed with leukemia.

While I’m here at Hopkins, they will be trying to get my blast count stabilized, and hopefully get the GVH somewhat under control.  Basically, they’re going to try and buy me some time, but not much.

One of the biggest highlights of my life was when I received my black belt.  It’s unfortunate that I was only able to wear it four times before I was too sick to be able to come to classes.

I have been blessed to know such a wonderful family of people.  The Order of Isshin-Ryu is an organization unlike any other I have ever been exposed to.  Many have called, sent cards and gifts and visited while I was in the hospital or at home during recovery periods, and I thank you all.  I don’t want to list names because there were so many, but Sensei Kline and Sensei Bell have since day one been there with their friendship, and very few days have gone by without an email, a call or a text message to say hi.  I value their friendship so much.

I regret that I was never able to attend a shiai as a black belt (except the one where I was promoted).  I would have enjoyed that, but I guess like many other things, it wasn’t meant to be.

As I said, I am not very good at this sort of thing, so I will stop there.  Thanks for everything.  I really appreciate your friendship, prayers and love.