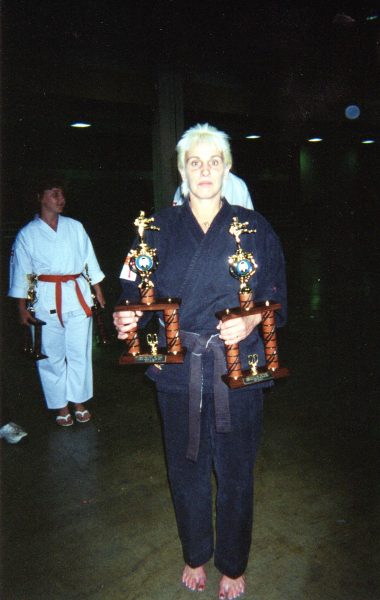 Sensei Karen Bronson was born November 16, 1955 in Arlington, Virginia and lived a very full life.  If you ever had the chance to meet her you know that she beamed with a spirit and energy very rarely seen.

Her background is quite interesting as she served for seven years in the U.S. Air Force where she was a jet engine mechanic.  Sensei Bronson opened many dojo over the years and even taught karate while serving in the Air Force.

In 1991, Sensei Bronson moved to Empire, Michigan where she opened the Glen Lake Dojo.  In 1994 she opened a karate dojo in Suttons Bay, Michigan with the idea of inter school competition and to pave the way for martial arts to be recognized as a sport in the area.  In the same year she created a “kids only” open karate tournament in Glen Lake, Michigan.  In 1994, she petitioned to join the Order of Isshin-Ryu and in 1995 tested for her black belt and was accepted as a member of the OI.  She opened several OI dojo shortly after and her students numbered well over 200 at that time

In 1997, she was recognized by the World Head of Family Sokeship Council in Orlando, Florida with the Silver Lifetime Achievement award.  During her span of over 37 years in martial arts, she was inducted into several Hall of Fames including the American Okinawan Karate Association (AOKA) Hall of Fame and the World Head of Sokeship Council.  She received various awards from the International Isshin-Ryu Hall of Fame including:  Dojo of the Year, Female Instructor of the Year, Spirit of Isshin-Ryu, Lifetime Achievement Award, and finally inducted posthumously into the International Isshin-Ryu Hall of Fame in 2006.

Sensei Bronson earned her degree from the University of Michigan where she majored in Psychology with a minor in Sociology.  She was a Duel Diagnostic Clinical Psychologist and a licensed Abuse Counselor in the state of Michigan.

Isshin-Ryu karate was Sensei Bronson’s life.  She often put aside her own needs to be with her Isshin-Ryu family.  She never turned a student away and would always make time for any student.  After a long battle with cancer, she passed away in the early morning hours of January 9, 2002.  She was found clutching her black belt in her hands.