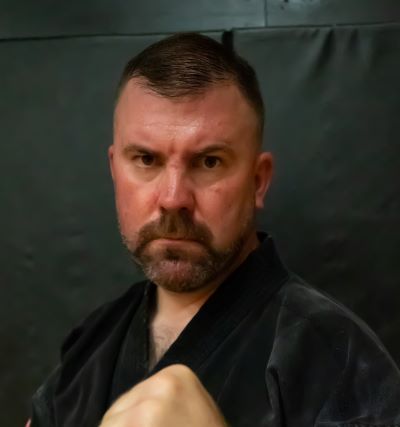 Kurt started his martial arts career when he was 10 in the American Kenpo system.  At the age of 14, Kurt was introduced to Isshinryu.  It was love at first sight.

He started his training at the hombu dojo (located in Elkton, MD).  It was a concrete building with no windows nor air conditioning.  Sweat covered the floors.  Students fought hard.  Kurt knew this was a place he wanted to train.  The dojo was full of talented martial artists who were gracious in helping others, not the least of whom were his first senseis – Grandmaster Toby Cooling and Master Bud Ewing.

Kurt was the smallest student in the dojo at a time when there were no junior ranks.  Smaller students developed technique, or got run over.  In addition to karate, he wrestled for his high school varsity wrestling team for four years, and was captain each of his junior and senior year.

Kurt earned the rank of shodan in June, 1990.  While in college, he continued to train at the hombu dojo, while also starting his first dojo on campus in 1991.  The dojo continued until he graduated.  Notably, a couple students from such dojo still train with him today.

During his college years, he started to train full contact with Sensei Juan Lopez.  It was during this time when it all “clicked.”

Kurt competed in most of the local tournaments, earning a reputation in the ring.  He won numerous tournaments, and the Cecil County Open multiple times.  A standout memory was fighting in the 1992 I.H.O.F. middle-weight finals in the Knoxville Coliseum, fighting on t.v. for the first time.

In 1995, Kurt attended the Eastern Shore Criminal Justice Academy, after which he served as a certified police officer in Ocean City, MD, from 1995 – 1997.  While his training was put to the test, Kurt believes his Isshinryu prevented far more fights than those in which it was used.

Kurt has travelled extensively teaching Isshinryu – from Puerto Rico to Australia.  He has trained defensive tactics to several law enforcement agencies, as well as conducted numerous seminars throughout the U.S.  He enjoys travelling to other Isshinryu tournaments, and hosting workouts at either his or the hombu dojo.

In October, 2017, Kurt was awarded the Outstanding Contribution to the Dojo Award at Don Nagle’s AOKA 60th Anniversary Hall of Fame Ceremony.  In 2019, he was inducted into the Isshinryu Hall of Fame, one of his greatest accomplishments to date.

Kurt lives on a farm in West Chester, Pennsylvania.  He is married to a patient wife, and has 3 young daughters.  If not at the office, dojo, or spending time with his daughters, you will likely find Kurt on his mower or tractor.