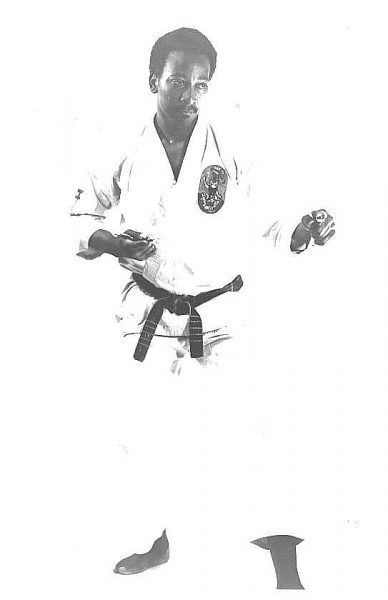 Malachi Lee’s introduction into Isshin Ryu began in the dojo of Master Ed McGrath.  In 1971 Dennis Bootle told Malachi he had to work with this guy in Maryland, Toby Cooling.  Lee hopped a plane from New York to Salisbury, Maryland and from there the two hit it off well.  Lee spent the weekend training with Master Cooling and upon leaving he told Denshi, “I’ve learned more this weekend that I’ve learned over the past 14 years in Isshin Ryu karate.”

According to Master Cooling, Malachi Lee could hit you with a spinning back kick without spinning.  Being 6’7” his reach and length was a gift that not many martial artists had around this time.  Master Cooling states, “He made you look short.”

Malachi starred in a 1975 film, Force Four.  IMDb provides the following description:  When a priceless African statue is stolen and its courier is murdered, the Force Four are called in to deal out some old fashioned retributive action.  Starring with Lee were Frank Ruiz, Alex Sternberg, and Wilfredo Roldan (see figure 103 above).