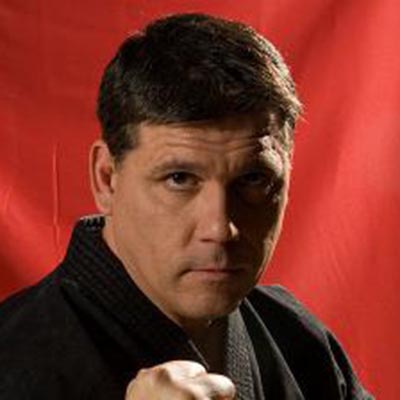 Master Ronnie Cimorose started karate in the Order of Isshin-Ryu in 1984 following the suggestion of his father to study under Master Toby Cooling.  Hereceived his black belt in 1989. He spent most nights each week training with instructors such as Master Toby Cooling, Master Bud Ewing, Sensei Juan Lopez, Sensei Larry Jackson, Sensei Danny Cross and would travel 2hrs one way to train under Sensei Barry Smith in Cambridge, Md.

Master Cooling granted permission for him to open his first dojo in Elkton, Md in 1990. Since that time he has taught hundreds of students, but has only promoted 15 to black belt due to high standards.

Master Cimorose spent most of his time in the 1990s running his dojo and competing in tournaments and shiais throughout the northeastern states. He was a member of the Order of Isshin-Ryu demonstration team, which performed throughout the MD/DE/PA area.

In 1994, Master Cimorose received the IHOF Instructor of the Year award in Pigeon Forge, TN. It was presented to him by Master Harold Long.

For over 10 yrs, he taught self-defense classes at the Cecil County Battered Women’s Shelter as well as the Cecil County Rape Prevention Center. Sensei Cimorose upon request has taught women’s self-protection classes in major corporations throughout Maryland and Delaware, as well as childrens classes for the Cecil County School District.  He also promotes the Order of Isshinryu by teaching seminars, and traveling to other dojos.

In the late 1990s, Master Cimorose became a member of the Board of Directors of the Order of Isshinryu, after spending several years as a member he worked his way up to president, he served a year as President and is currently acting as vice president.

Master Cimorose balances his time with his wife Cheryl and his daughter Julia when he’s not teaching in the dojo.