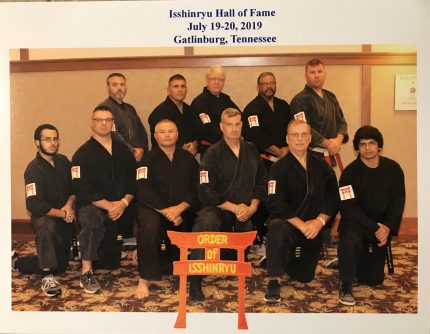 The Order of Isshin-Ryu (OI) enjoyed a great weekend in July at the 40th Anniversary Isshin-Ryu Hall of Fame (IHOF) Tournament and Banquet.

Following check-in and dinner after a full day of travel, the Order of Isshin-Ryu Karate’s Skeet-ball Championship of the World began at the local arcade.  Sensei Harris is the 2019 champion!  In 2nd place was Sensei Jimenez, followed by 3rd place recipient Master Cimorosi.

The OI was represented well at the IHOF tournament.  First and foremost, a heartfelt and big congratulations to Sensei Kurt Kline for being inducted into the Isshin-Ryu Karate Hall of Fame.  A tremendous accomplishment!

Congratulations to Sensei Brittingham for placing 4th in weapons Kata (Tui-fa), Mr. McNair for placing 4th in Kata, and to Mr. Fellenbaum for placing 3rd in sparring (Kumite).  The OI performed well on the tournament floor.  There were many compliments from other Isshin-Ryu instructors, including about Kata of Mr. Jones and Mr. Patel. The tournament divisions were very large, breaking an IHOF record of over 500 competitors.

On Saturday, July 20th, the IHOF Karate tournament continued, followed by a nice dinner with Isshin-Ryu friends, and then an after-tournament party with many various Isshin-Ryu Karate-ka from all over the world.  There was dancing and mingling until close to midnight.

Sunday morning, everyone met for breakfast and said their goodbyes to begin the long trip home. The van arrived back home around 8 PM Sunday evening.

So many great Isshin-Ryu friends from all over the world attend this event, and the OI is very well-known and very well-respected among them.  The IHOF tournament and banquet is a great way to meet other Isshin-Ryu Karate-ka and exchange ideas. It’s a great opportunity to meet some of the most-respected competitors in the world.

A road trip and weekend full of great memories.  Lots of laughs and jokes among the traveling black belts.  If you get bored at the IHOF or in Gatlinburg, Tennessee it’s your own fault because there is plenty to do and lots of fun to be had.

Now’s the time to start planning for next year…  ⛩