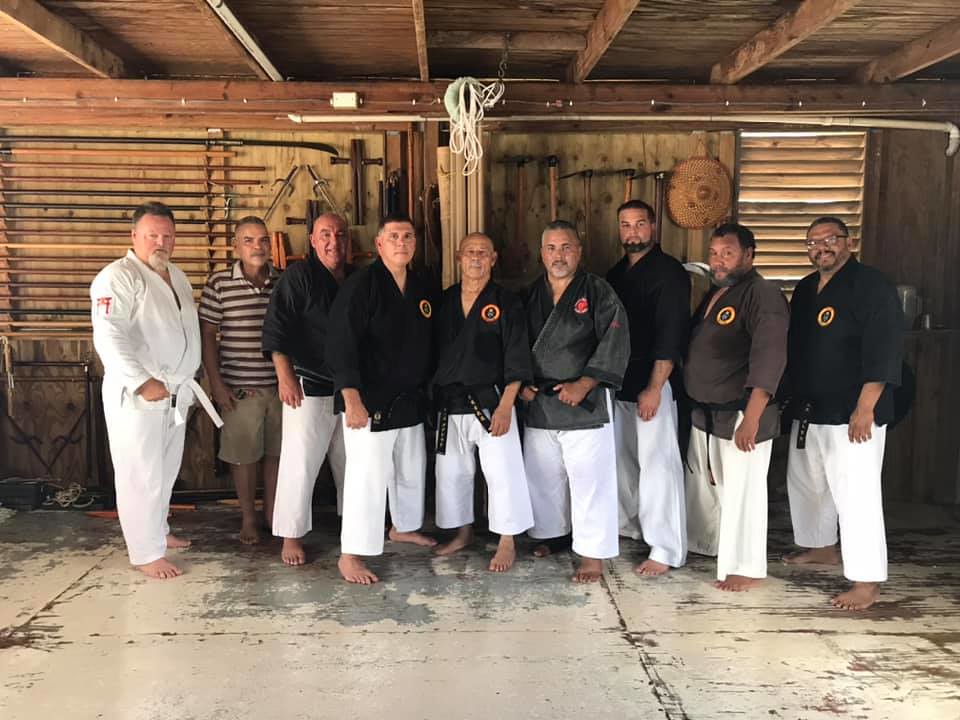 The entirety of Friday was spent traveling across the Island to the west coast where they took photos in Gi along the beaches and the cliffs. They stopped at Cabo Rojo and performed Seisan Kata together at a historic lighthouse overlooking the ocean.

Saturday was spent in Sensei Cuadrado’s home Dojo where they practiced Bo, Basics, and Bo Bunkai by performing Kimo Wall’s Papu Haku Sho Kata. Mama Kobudo (Ms. Iris Quinones Nieves) treated them to homemade Bacalaito’s which was very delicious! Order of Isshin-Ryu (OI) brother Sensei Bobby Gonzalez stopped by to say hello and shared his legendary side kick technique with Sensei Powell and the rest of the group. It was also great to meet and train with Sensei Al Ocasio.

Sensei Barbalinardo and Sensei Powell had to head back home on Sunday. The rest of the group returned to Sensei Cuadrado’s Dojo for some special one-on-one training. Mr. Carter worked with the Bo, Basics and Kata. Sensei Cimorosi worked on Sai Basics and polished his Sai Kata (Shimbaru Sai). They had a nice dinner and went back to the condo for more training.

Monday morning was the last day and everyone got up early for one final round of training at the condo before leaving for the airport.

The trip to Puerto Rico was very fun and exciting with many laughs, tons of world class Kobudo training, a lot of site seeing, great Puerto Rican food, and most importantly a great time with Isshin-Ryu and Matayoshi family!

A special congratulations to Mr. Al Carter who has only been training in the Elkton Dojo for a very short time, but did a fantastic job representing Order of Isshin-Ryu Karate and who also did an excellent job working with Sensei Cuadrado, and Sensei Rivera on Bo Basics and Bo Kata. A special thank you to Sensei Tato Rivera for working with Mr. Carter.

Sensei Cuadrado, Sensei Jimenez, and Sensei Rivera are awesome martial artists and world-class Kobudo instructors. It’s a blessing to call them brother in the Order of Isshin-Ryu!