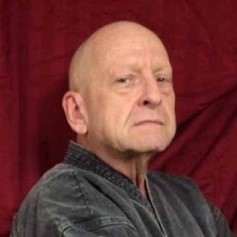 Joseph Ward Nickle of Millington, MD, passed away peacefully at home March 1, 2019, after battling pancreatic cancer for over three years.

He was born in Elkton, Maryland to Ward B. and Rose (Hague) Nickle. He is survived by his wife Joan Berwick, his sons Jason, Ward, Joe and Josh, brothers John and David (Elkton), sister Teresa Figlow (Clark Summit, PA), step-daughter Grace Kelly Wright (Millington), and ten grandchildren. In addition to his parents, Joe was preceded in death by his brother Charles and step-daughter Erin Kelly.

He was an Army Veteran serving in the Vietnam era. He was most recently employed by Atlantic Tractor (Cecilton). Prior to that he was Co-Owner of Nickle’s Market in Elkton. Joe was most proud of being part of his other family, the Order of Isshin-Ryu and the Hombu Dojo in Elkton, having attained the rank of Black Belt in 1985. He enjoyed creating shade and butterfly gardens, repairing musical instruments, playing guitar, keeping the wild birds fed, helping others, and making his wife, Joanie, happy.

He was known to be a quiet and kind man; a hard worker, good neighbor, and loving husband and grandfather.

A Celebration of Life was held on Sunday, March 10th, at The Kitty Knight House, Georgetown, Maryland. Friends and family gathered at 1 pm for brunch. The Order of Isshinryu Karate was greatly represented at the memorial and life celebration of our Brother Black Belt Joe Nickle. In attendance was Master Bud Ewing, Sensei Bailey Russell, Bob Foard and Master Cimorosi.

Master Ewing and Master Cimorosi spoke on behalf of the Order of Isshinryu and expressed what Joe meant to us as an Order of Ishinryu Black Belt family member. Master Ewing read a letter sent by one of our long ago Kyu ranks Mr. Davis who spent a lot of time in the Dojo with Joe Nickle,  I was honored to tie Joe’s Obi in a knot for one last time and explain the significance of the knot.

There were many people who attended the life celebration luncheon that at one time were members of the Order of Isshinryu. We were spoken of often as people stood up to express their feelings or shared stories. Joan shared stories of their life together and shared with us how Joe had turned his basement into a dojo. Even though Joe would struggle, he would still spend time in his Dojo working on his Kata.